On Oct. 18, 2012, the FDA confirmed that a fungus was found in vials made by a pharmaceutical compounding facility in the United States. This specialty pharmacy became the center of a national investigation spanning 23 states. Investigators determined that this single incident resulted in at least 64 deaths and over 750 total affected patients. In this case, the cost of an outbreak included a nine-year jail sentence and a $200M (two hundred million) fund for those affected by the outbreak. This could have been avoided through more careful attention to processes and procedures which help to avoid contamination.

In compounding facilities, the air entering a room is not always sterile and can contain various pathogens. These pathogens settle onto surfaces in the room, adding to the bioburden level. Accumulated pathogens on high touch surfaces transfer onto bare hands, gloved hands and clothing of staff and technicians whenever touched.

One of the best methods to reduce contamination transfer is to incorporate an effective decontamination protocol. While there are many methods that have been used for decades, these techniques leave thousands of pathogens alive and increase their resistance to further cleanings. Additionally, standard cleaning procedures are time-intensive: this cuts into profit over multiple applications.

A great partner in the fight against contamination is AIHP. When used as part of the decontamination process, AIHP neutralizes chemical and biological agents via oxidation with six-log efficiency. It destroys proteins, carbohydrates and lipids on contact, killing active bacteria, bacteria spores, mold spores and viruses.

When used as part of pharmaceutical best practices, the AIHP decontamination process keeps facilities open, clean and safe for employees and consumers. 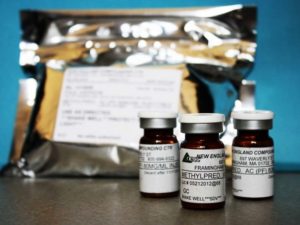 An outbreak of fungal meningitis and other infections ultimately proved to have started at a pharmaceutical compounding facility based in New England. The final verdict sentenced one executive to nine years of prison and the company to $200M in fines, to be disbursed to affected individuals and families.

Get your facilities clean.

Our friendly, local team will be happy to answer your questions and help you schedule an estimate.

Stay updated on the latest news and advancements in sanitization and decontamination.